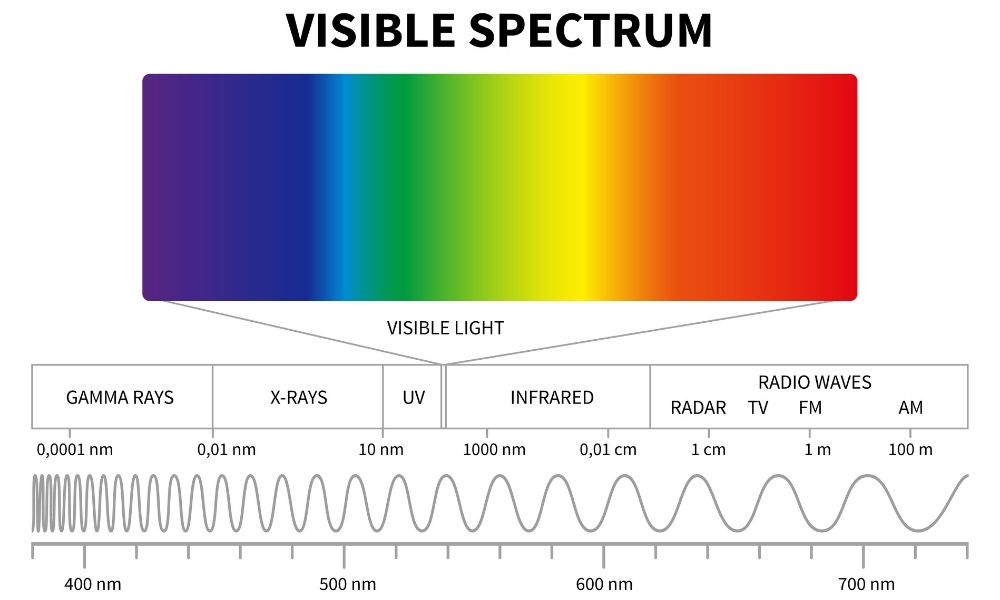 “Raging Martians Invaded Venus Using X-Ray Guns.” “Granddad Xavier Unfortunately Vomited In My Room.” Sounds like the premise of a science-fiction novel—along with something that could distract you while you’re trying to read that novel. Instead, what we have here are helpful mnemonic devices that will help you remember the seven traditional bands of the spectrum of electromagnetic radiation. In a previous post, we explored the difference between photometry and radiometry—namely, that radiometry concerns the measurement of the entire radiation spectrum, whereas photometry only concerns itself with the segment of the spectrum that’s visible to the human eye. There’s a lot worth learning on either side of visible light. Class is now in session for Electromagnetic Spectrum 101, with radio, microwave, and infrared waves first on the syllabus.

Radio waves have the lowest frequency and highest wavelength in the spectrum. German physicist Heinrich Hertz further explored the long-theoretical connection between electricity and magnetism, discovering that an electromagnetic transmitter could emit waves for an antenna to receive. Though he initially saw no practical application for what scientists then dubbed “Hertzian waves,” his name has lived on as the measurement of wave frequency, in which radio waves measure between 3 Hz and 300 GHz. Within that range, you’ll recognize 87.7 MHz through 107.9 MHz as the North American FM radio spectrum and 530 kHz through 1700 kHz well below it as the dwindling AM band. But radio isn’t just for radio stations—television broadcasting uses radio waves, too, as do police communication, air traffic control, and our cell phones. At frequencies above 300MHz, we cross into the next band of the spectrum: microwaves.

We know what you’re thinking, and it involves heating up lukewarm coffee or frozen chicken nuggets. But microwave radiation has more uses than quick work in the kitchen. Microwaves behave similarly to higher frequency radio waves such as FM and UH—rather than traveling along the contour of the earth as AM radio does, microwaves use line-of-sight propagation, making them ideal for secondary broadcast purposes such as remote broadcasting linkups and satellite transmissions. Of course, there is the microwave oven, too, which uses microwaves to excite molecules in food to create heat energy.

Beyond microwaves lie infrared waves—the last band of the electromagnetic spectrum before reaching visible light. Infrared waves, though shorter than microwaves at a maximum of one millimeter, are too long for the human eye to detect in most instances. Infrared waves have had an association with heat since their discovery when their presence affected a thermometer near a prism. We use infrared not only for heating but also for a host of scientific uses, from astronomical applications to “night vision.” Gamma Scientific specializes in light measurement equipment that can measure visible light and infrared light for scientific applications.

Continuing Along the Spectrum

This concludes Electromagnetic Spectrum 101, for now, having explored radio, microwave, and infrared. In our next look at the spectrum, we’ll move to the best-known band: visible light.