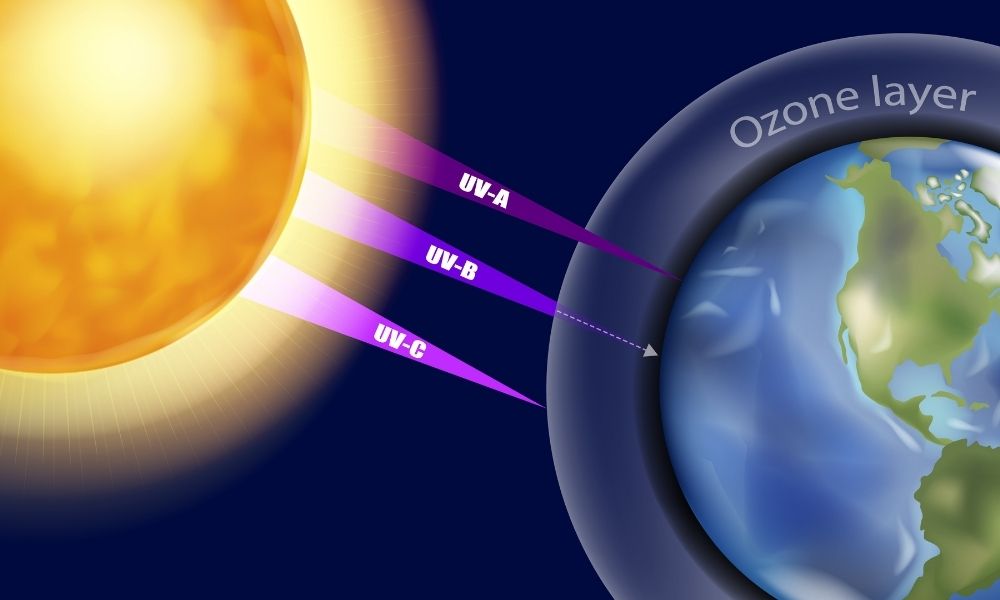 Ultraviolet light is a form of electromagnetic radiation that causes summer tans. However, UV radiation is harmful to live tissue when exposure is excessive—hence, sunburns. Electromagnetic Spectrum 101 returns with the next chapter of “Raging Martians Invaded Venus Using X-Ray Guns,” this time focusing on Ultraviolet radiation.

Ultraviolet by the Numbers

Ultraviolet radiation is found between visible light and X-rays in the electromagnetic spectrum. UV light has wavelengths ranging from around 10 to 400 nanometers. Violet light has a wavelength of 400 nanometers. Ultraviolet radiation has a frequency range of 800 to 30,000 terahertz (THz). This is invisible to the naked eye, because as we learned in the last installment of Electromagnetic Spectrum 101, visible light only reaches to around 790 THz.

In the presence of ultraviolet radiation, chemical bonds will break. UV photons can promote ionization, a reaction wherein electrons detach from atoms, due to higher energy. The vacancy that results has an impact on the chemical characteristics of the atoms, causing them to establish or break chemical bonds that they would not have formed otherwise. This may be useful for processing chemicals or harmful to other materials and living tissues. This damage can be beneficial in some cases, such as sanitizing surfaces, but it can also be damaging, especially to the skin and eyes, which are the most vulnerable to higher-energy UVB and UVC radiation.

The sun is the source of most natural UV light. Nevertheless, only approximately 10% of the sunlight is UV, with a mere one-third penetrating the atmosphere reaching the Earth. On the other hand, 95% of the sun’s UV energy reaching the equator is UVA and 5% is UVB. The Earth’s surface does not attain measurable UVC from solar radiation, as ozone, molecular oxygen, and water vapor entirely absorb shorter UV wavelengths in the upper atmosphere. A suntan is a biological response to UVB exposure. In essence, the tan comes from a natural defense mechanism of the body. This is the melanin pigment that is produced by skin cells known as melanocytes. UV radiation is absorbed by melanin, which then radiates as heat. When the body senses solar damage, it sends melanin and tries to protect it from further harm. The pigment darkens the skin.

Now that you’ve learned a little bit about UV light, what it does, and how it affects us, check back in next time for Electromagnetic Spectrum 101: X-Rays. And if you’d like to be able to measure light for yourself, check us out right here at Gamma Scientific for all your light testing equipment needs.

What is a Light Meter in Photography?