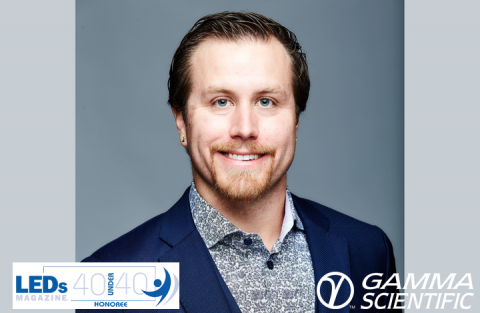 August 14, 2020 – San Diego, CA – Gamma Scientific announces today that Trevor Vogt, Director of Engineering, was honored as part of LEDs Magazine’s inaugural “40 Under 40 Awards” program.  Selected by an esteemed and experienced panel of judges from the LEDs and lighting community, Trevor has been recognized for his outstanding contribution and dedication to the field.

“On behalf of the LEDs Magazine 40 Under 40 Awards, I would like to congratulate Trevor on his honoree status,” said LEDs Magazine’s Editor in Chief, Maury Wright. “This competitive program allows LEDs Magazine to celebrate and recognize the rising stars in our community – those who have demonstrated the leadership and fortitude necessary to bring this industry to the next level.”

The test and measurement (T&M) function is often forgotten across the technology sector, yet neither product development nor production could happen without the support of test engineers and the specialized equipment developed for specific applications.

Trevor Vogt leads the development of such equipment at Gamma Scientific. He was also the lead engineer on the RS-7 Series of tunable light sources that later won an LEDs Magazine Sapphire Award back in 2018. Those products have found applications beyond LED lighting and horticultural markets into augmented and virtual reality and other consumer electronics, mobile and desktop display characterization and calibration applications, as well as airborne and space-based sensors.

Trevor has been involved with leading industry organizations including the Council for Optical Radiation, and with an industry and National Institute of Standards and Technology (NIST) liaison group that advises NIST of calibration and standards needs to support industrial growth. Moreover, he has participated in the Commission Internationale de l’Eclairage (abbreviated CIE and translated as International Commission on Illumination) working on standards and procedures of metrology. That work spans the fields of vision, photometry, and colorimetry relative to natural and artificial light.

Trevor earned an engineering degree at the University of California at Santa Cruz and participated in the Jack Baskin School of Engineering and conducted research in the Applied Optics Group. He holds a certification as a Lean Six Sigma Yellow Belt.